aspirations. Something brief as fireflies'
mating calls lies behind gypsy
trinket-ed door, you think
at the Christmas-lit porch.

(just because!)
"Movie poster for The Jazz Age (1929) with slogan 'A Scathing Indictment of the Bewildered Children of Pleasure Riding the Gilded Juggernaut of Jazz & Gin -- Destined to Rock the Nation!'" 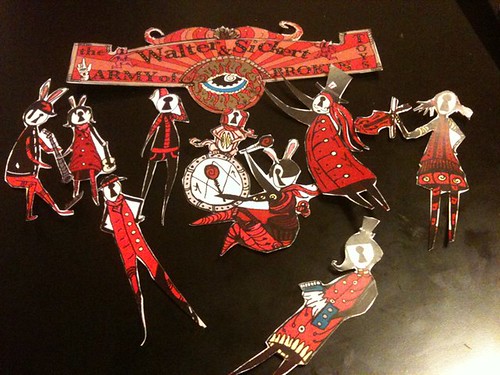 Get your Dream Drome tickets!
The nice Gibson girl
paper doll is selling.

sugar cubes. Sepia films over
ever-present goggles
that pick up all our neutrino haloes.

near the ankle. Goggles as useless
as a view through lace cuffs
at the glass blower's. The market

where you will be presented
the shooting gallery through
darkened eyes. If hit you win

the inflated silhouette
your Thanksgiving centerfold.
Admission price wasn't much,
just the feeling
in the very tips
of your fingertips. 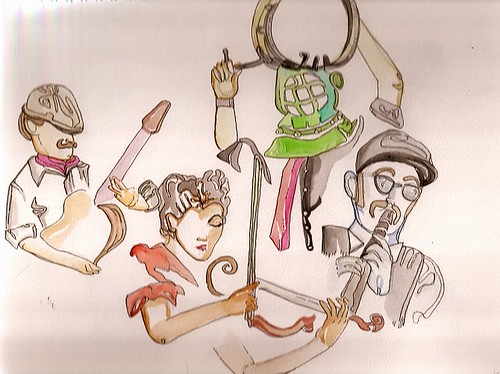 (watercolour trifle of some of my lamb family)

week43: 1, 2
here are the rest : http://locksmithy.livejournal.com/tag/poem-a-day


Too tired to be more creatively caped
come sunset I'll not be appropriately whitened
patent. So lime green finger-witchy
gloves it is and before our bud (who can best

be described as Eeyore)-- says, "Your friend
isn't doing well" and after I've told 'Roo
he looks rockabilly kerchief up
my skellyton cup of his cheek.

Familiar with everyone's five o'clock troubles.
Not that. Young Dita needs a lift
home. As bad as shattering one's perfume
bottle collection each trip on the icy sidewalk.

Macabre & I will need some 'Grey Gardens goes IHOP'
for some hope tonight. We fluff
our respective nerves, adjust polyester. Banshee quotes
to one another over coffee.

week43: 1
here are the rest : http://locksmithy.livejournal.com/tag/poem-a-day


Thimblewind through to the miniature
Spookhouse. Unruly ferris wheel feeling
all growls 'vaporate ~ such soup

on a guest wind, digging your own cotton
tail'd den tuber-dear to skeletal porch. Smell
the flap of trench coat on underclothes line.

feet under coffeetable, altar awe
fawning over hot pop of a crock pot.
No bird scales practicing in the yard

when we power amps, bruising knees
and dilated cries. Such soup-- and Ghoul,
you have yet unhooked the
decapitated gold door.

{this space reserved for future attempts of m'own Spookhouse art. til then, Gorey does it best!}

Grateful credit & 'knowledgement of brain-thievery from the Etsy shoppe name, Thimblewinder. Marissa is awesome and you probably already know-- makes the zine Miss Sequential. she was nice to me on a very hot day last Somerville Open Studios weekend [VISIT HER STUDIO this year!] ;) of course the above-item from her shoppe is called Tiny Party decoration!


this is wk43 #1! here are the rest : http://locksmithy.livejournal.com/tag/poem-a-day

ghetto blaster headlights
from overdubbed truck
down with crepes, only grapes

ukulele necks billowing
out the back of capes could
robot bewilder, the elfin scout

helium may show up on
this green screen, you know?
Planet Allston filled with hope


set to bad music, the sewing machine
needle's wide unblinking eye
came to the inventor in a dream

plastic flowers and detergent
set the laundromat to post-modern
sparkle, i cold cycle because i care

waiting for green screen, nervey
up late before hating the dying
breed of evening weathermen

toupee cloud cover
listen i may be all thumbs
but i've taken the pulse
of the situation, it's sincere

(picture of "Tiny TV" by walter, from 'Worried all the time' shoot the next day...)

First in a series of imaginary outings?

The 'long and short of it' bus driver
's reprieve. Enabler of aloe plants,
Jet Blue and Pthalo Blue.

(Don't cry into your hands if stained
with the latter.)
.

A canker sore secret,
splash of red on the trash lid,
cat nowhere to be heard.

How sweet for the King of odd porch
projects to bring the no-good ham
to the vegan restaurant, city camo' grey.

wastrels choosing a side. Spit valves
and rusty medals of Honour piping in
a pied pinstripe, accessorized

blazes of glorious blazers
and manly back pat hugs.
Altos in track pants, professors in

why the hell not plaster this here too. it's topical appro' and it's my blog, right? eh. megalomania, someone's gotta do it. STEAMPROM pictures. Yes i have epic

ensmb patch-vertisement on my also Army of TOys bling'd up soldierette blazer. Sometimes i'm a marionette majorette for the Nortons. i call the above photo Brokedy Nortons. 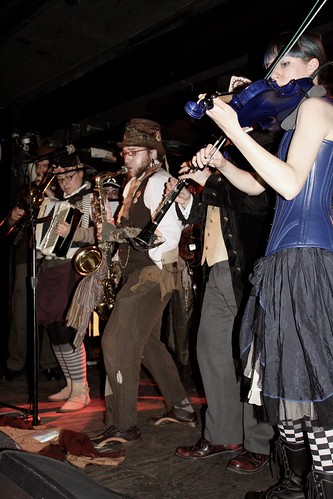 I can't stay any longer than tuber roots
To lesson plan trouser roles, Jacobin
Fashions in the post-stratosphere world

Our space shuttle has break-away porcelain
Turbo boosters, watercress-distill'd petrol
Our Lady of the Mass Pike lifts the mood

From the pity party of the sub-woofer, EZ
Passed over, favors from our rêve of revolution
I've drawn our brows theatrically

Furrows, tired lines lit by stage torch
It all seemed so sterile and romantic
Reading Petit Prince in school, staring

The mirage of her pursed mouth
Snaggle laugh, she tugs her goggles
Round the dunes below neck 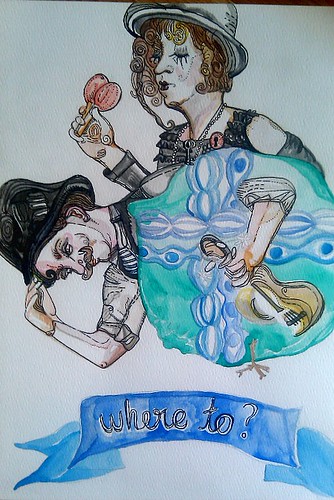 Sneak peek of tiny instruments's Encyclopedia Frenchica children's book for adults. (part of Worried all the Time. A Rob Potylo television program, *our premiere is May 28! Tiny Space Instrument Revue!)

sepiachord : "Cataclysm" by Walter Sickert & the Army of Broken Toys is the Sepiachord Video of the Day.
http://www.youtube.com/watch?v=wcEN70G0ka8

mlle.tumblr x-post dither: our finale song Boston Rock 'n' Roll Rumble prelims monday 4/4/11. i'm so excited this got taped! Watch all my bandmates rock out and be-ribboned hysterically go back to back and then some drum roll please. i love us. we love to put on a show, dinner and a show. we like to nom one another? around 2:30 you can watch me bunny headbang awkward metal uke out. ;) i guess i might show my bum bum at the ver'end too, like i do.
Collapse